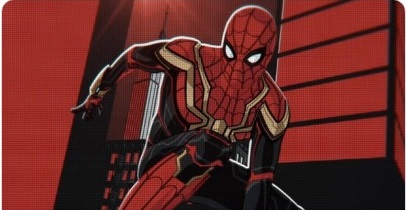 The WAX blockchain tweeted that they have been selected for the latest Spiderman NFT promotion. This marks the first NFT promotional release that involves a studio and a major theatrical exhibitor. 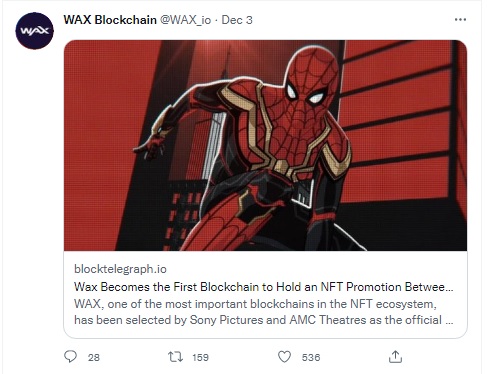 Adam Aron who is the Chairman of the Board and CEO at AMC Theatres has been quoted saying:

“In addition to being eco-friendly, it was essential that the process for receiving the NFT was also consumer friendly. It’s easy to use and already widely adopted WAX Cloud Wallet combined with no gas fees for minting, sending and receiving NFTs gave us confidence that everyone, including first time blockchain users, would be able to participate in the promotion.”

WAX will be ensuring that the entire process will be as user-friendly and accessible as possible by having a dedicated site for the release. This will enable people who are new to NFTs to also participate easily. 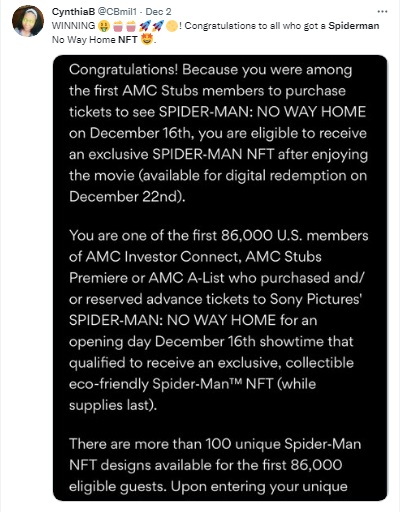 It Is All About WAX

WAX is a purpose-built blockchain founded by William Quigley and Jonathan Yantis. It has been designed to be scalable and eco-friendly. The WAXP token has many uses that include staking, voting, DeFi applications and NFT purchases and sales. Developers can also propose WAX projects through the WAX Labs. You can use WAXP to buy and sell over 60 million NFT assets from a choice of over 30,000 dApps and NFT projects.

With this tie-up, WAX has access to the huge Spiderman fan base. People who have no prior exposure to NFTs will be able to start their journey. It will also generate a lot of publicity among those who missed out on the advance ticket purchases.

We use cookies on our website to give you the most relevant experience by remembering your preferences and repeat visits. By clicking “Accept”, you consent to the use of ALL the cookies.
Do not sell my personal information.
Cookie SettingsAccept
Manage consent

This website uses cookies to improve your experience while you navigate through the website. Out of these, the cookies that are categorized as necessary are stored on your browser as they are essential for the working of basic functionalities of the website. We also use third-party cookies that help us analyze and understand how you use this website. These cookies will be stored in your browser only with your consent. You also have the option to opt-out of these cookies. But opting out of some of these cookies may affect your browsing experience.
Necessary Always Enabled
Necessary cookies are absolutely essential for the website to function properly. These cookies ensure basic functionalities and security features of the website, anonymously.
Functional
Functional cookies help to perform certain functionalities like sharing the content of the website on social media platforms, collect feedbacks, and other third-party features.
Performance
Performance cookies are used to understand and analyze the key performance indexes of the website which helps in delivering a better user experience for the visitors.
Analytics
Analytical cookies are used to understand how visitors interact with the website. These cookies help provide information on metrics the number of visitors, bounce rate, traffic source, etc.
Advertisement
Advertisement cookies are used to provide visitors with relevant ads and marketing campaigns. These cookies track visitors across websites and collect information to provide customized ads.
Others
Other uncategorized cookies are those that are being analyzed and have not been classified into a category as yet.
SAVE & ACCEPT