The United Arab Emirates (UAE) has placed a significant emphasis on the application of blockchain technology in its long-term planning and is in the process of constructing a decentralized ecosystem in preparation for becoming a worldwide hub for blockchain technology. 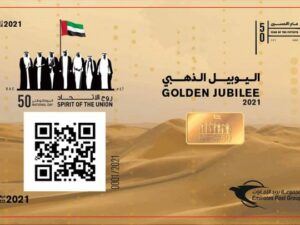 In order to commemorate the 50th anniversary of the country’s Foundation Day, the United Arab Emirates has issued a postal stamp that is the most costly modern stamp anywhere in the world.

The first issue of a modern postage stamp was released with four different editions by Emirates Post Group, which is a post office that is owned by the government. The digital version of each physical stamp in the collection is included in the package.

The United Arab Emirates and The Spirit of the Union

The “Golden Jubille 2021” edition is the most costly one; it includes a total of 2021 pieces and costs a total of 2021 AED, which is equivalent to $550 USD. One gram of gold is embedded within each stamp.

The second stamp is referred to as the “Spirit of the Union — 1971,” and it represents 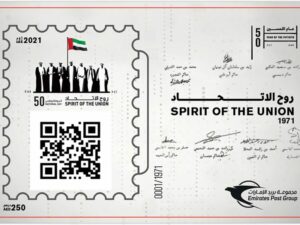 the founding fathers of the UAE who were responsible for establishing the United Arab Emirates. What do you know, the third stamp reads “Year of the 50th — 2021,” and the fourth stamp reads “Projects of the 50th 2071,” both of which highlight the UAE’s forward-thinking vision for the future.

The non-fungible token (NFT postage stamp) included in each of the other three collections can be purchased for around 250 AED, which is equivalent to $68.

Abdullah Al Ashram, CEO of the post group, to get a better understanding of the concept that is behind the debut of digital collectable postage stamps. According to Ashram, the choice was made to commemorate the 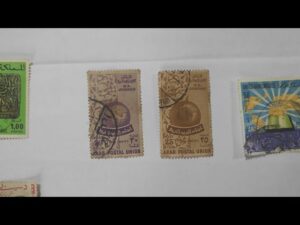 celebration of the Founding Day, and anyone from anywhere in the world is able to purchase it.

“It is undeniably an integral component of the overarching plan, and blockchain technology will serve as the foundation for a great deal of the work that we do at Emirates Post group.”

The Emirates Post Group is the only company in the Middle East and North Africa to have issued postage stamps featuring NFT from the stamps’ initial debut. Over the course of the past year, the UAE’s commercial strategy has significantly included blockchain technology.

Also Read: TAG Heuer, a Swiss luxury wristwatch, has released a smartwatch that is equipped with NFT.