After the fiasco during the UEFA tournament, it's possible that France may adopt NFT ticketing more quickly.

In light of the fact that many soccer fans in Paris last month had their experience at the UEFA Champions League final ruined by bogus tickets and gatecrashers, the French authorities have taken notice of the situation. 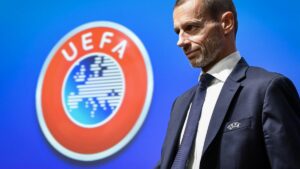 It is possible that the chaos that occurred before the final game of the UEFA Champions League may result in the widespread adoption of nonfungible tokens (NFTs) for the purpose of tickets at sporting events in France. The nation has already announced that it aims to utilize NFT tickets for the Rugby World Cup in 2023 as well as the Olympics in 2024 in Paris.

One of the factors that contributed to the mayhem that ensued during the soccer championship on May 28 was the widespread forgery of tickets. After the police deployed tear gas to restore order and the match between Liverpool FC and Real Madrid was delayed as a result, it became a significant embarrassment for the nation. Michel Cadot, an envoy for the French government in charge of the Olympics, delivered a report to the office of the French prime minister last week. In the report, he recommended a number of actions that could be taken in the future to reduce the likelihood of disorder at sporting events, one of which was the widespread implementation of NTF ticketing.

rugby tournament and the Olympics “would make it feasible to prefigure the planned systems and to break in the working ways, as well as the reflexes of multi-actor management to meet obstacles.”

Using blockchain technology and QR codes, the French system is planning to issue digital tickets that are non-transferable and can only be used once. Ticket activation would take place inside a security zone that would surround the venue, and tickets would be sent out by SMS not too long before events.

One of the primary benefits of using NFT ticketing is that it eliminates the risk of ticket forgery and scalping, which in turn raises both the level of safety at events and the amount of money that event sponsors make. NFT tickets have the capability of having additional functions encoded into them. These capabilities include the ability to visit a VIP area or get a memento item.

The sale of tickets is simply one of the entry points that non-profit organizations (NFTs) have into the athletic industry. Since 2020, NFT collectibles have been included in the marketing strategy of a number of teams, and their popularity continues to rise. Even fan involvement strategies, like voting and access to actual items, may be encoded into them if the developer so chooses.