TAG Heuer, a Swiss luxury wristwatch, has released a smartwatch that is equipped with NFT.

Watchmaker TAG Heuer has collaborated with the nonfungible token (NFT) community that revolves around Bored Ape Yacht Club and CLONE-X to develop a smartwatch that can display NFTs and connect to cryptocurrency wallets such as MetaMask and Ledger Live. TAG Heuer’s new smartwatch will be available for purchase later this year. The firm claims that the TAG Heuer Connected Calibre E4 will have uncomplicated functioning, with NFTs being sent to it via a smartphone that is synced with it. The software on the device is configured to accommodate both static and animated NFT artwork, and it is possible to transmit many NFTs to the watch all at once. According to the company, the NFT artwork may have its size adjusted and be positioned inside one of three different designs that are accessible within the watch.

In a recent article on their blog and tweets, the watch company outlines the current capabilities of their wristwatch, including how it displays and manages non-traditional artwork. 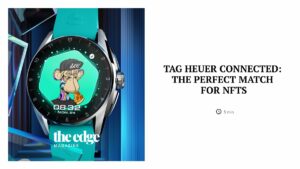 “While some NFTs consist of static pictures, others are animated GIFs. The face of your TAG Heuer watch will be able to display various formats in pristine clarity, with animations that play in an endless cycle.”

In addition to this, the wristwatch will be able to connect to the blockchain and authenticate any NFTs that are held by the person wearing it. In their announcement, TAG Heuer provides a description of the feature stating, “Displayed in a hexagon with a cloud of particles orbiting around the picture, verified NFTs are shown in this format.

This new NFT capability is going to be made accessible to all Tag Heuer Calibre E4 users as a free update that can be downloaded from Google Play and Apple’s App Store.

TAG Heuer is among the new set of Companies in Web3

The firm maintains its forward momentum in the Web3 domain by deploying an internal development team to work on blockchain-related initiatives. TAG Heuer entered into a partnership with BitPay in May, and at that time

they started taking payments in Bitcoin (BTC) as well as eleven other cryptocurrencies, including six stablecoins that are tied to the US dollar. NFT watches are not an entirely novel concept; in recent months, Bulgari, Jacob & Co., and other companies have entered the market for these watches.

The mainstream media was flooded with stories about NFTs in 2021, and individual sales of NFTs reached the tens of millions. According to reports, sales have not been affected by the current general market circumstances or the spiraling costs of NFTs.

OpenSea Announces Migration to the Seaport protocol in Mid 2022