According to a post on its official Twitter Page, Sapien Network announced that Polygon Studio would spearhead its latest round of funding, which will be deployed to build the first sovereign digital nation, dubbed The Sapien Tribe.

While Polygon is slated to co-host the first Congress of the Sapien Tribe, the event will also include an NFT charity auction. Speaking further on the listing event, Sapien Network added that the Sapien Tribe Congress is only open to Sapien Tribe Passport holders. For those just hearing about Sapien Tribe Passport, it will interest you to know that it is a unique kind of NFT that will provide a Social Ledger for interactions, Liquid Citizenship in the ecosystem, and a Unique 1-of-1 historical avatar. 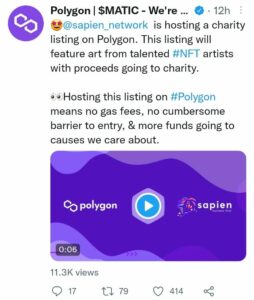 The Sapien Tribe At A Glance

The Sapien Tribe is carefully designed to help people sensemake together, take a collective stance on global problems, and build a community around shared values. Through the Sapien Tribe, the community will channel their voice and expertise towards the development and advancement of the course of the Sapien Tribe.

Thanks to Sapien Network’s unparalleled development experience working with Polygon, the company plans to mint The SPN Token, Passport, and future tokens on Polygon’s ecosystem, especially since the network guarantees instant and scalable transactions.

On its part, Polygon seems to be excited about this event as it announced on its official Twitter page that the event would mean no gas fees and no cumbersome barrier to entry. Above all, funds generated from the event will be channeled towards causes Polygon cares about.