Binance to get Football Fans into Web3 with Cristiano Ronaldo Partnership

Binance, and Cristiano Ronaldo have entered into an exclusive nonfungible token (NFT) collaboration.

Cristiano Ronaldo said that the idea of bringing new experiences to his fans through NFTs is something that he wanted to be a part of. Binance, the world’s largest digital currency exchange, and the famed football player Cristiano Ronaldo have announced a partnership. In a move that will definitely catch the curiosity of football fans as well as cryptocurrency enthusiasts. As a result of the new relationship, Binance will become the sole cryptocurrency partner of Ronaldo’s CR7 brand. 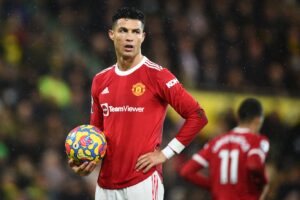 This activity is being conducted in order to spark people’s interest in Web 3, digital currencies, and the opportunities that will arise as a result of that potential. Changpeng Zhao, the CEO of Binance, described Ronaldo as the “perfect ambassador” for digital currency. “He recognizes the promise of blockchain technology and how it can improve people’s lives,” Zhao added. “He understands how blockchain technology may help individuals.” ”

Binance, a cryptocurrency exchange, and football player Cristiano Ronaldo have entered into an exclusive nonfungible token (NFT) collaboration. This partnership will last for multiple years. Through local and international NFT efforts, the cooperation intends to familiarize soccer fans with the Web3 ecosystem.

Binance mentioned that the arrangement includes the production of a number of NFT collections in collaboration with Ronaldo. These will only be available for purchase on the Binance NFT platform, and the debut of the first collection will take place later on in 2018.

Binance CEO is Excited about this New Partnership

The current CEO and founder of Binance, Changpeng Zhao, has lauded Cristiano Ronaldo for his achievements in the sport of soccer and stated that the sportsman has “transcend[ed] sport to become an icon in various industries.” Additionally, Zhao stated that: Because of his genuineness, his talent, and his commitment to charitable causes, he has built up one of the most devoted fan groups in the world.

This Endorsement Comes during the Crypto Winter

This endorsement come at a time when Crypto companies are laying off employees and pulling out of investment deals. Ronaldo received a reward in the form of crypto tokens in March for all of his accomplishments in the sport. JUV tokens, which are the official supporter tokens of Juventus F.C., were presented to the famous soccer player in recognition of each senior career goal he scored. In spite of the crypto winter that is occurring right now, the CEO of Binance voiced optimism earlier in June. When Zhao mentioned that this is his third crypto winter and Binance’s second experience with this type of market circumstance, he did so with an air of self-assurance, suggesting that the team is experienced in navigating their way through a bear market. In addition to this, the Chief Executive Officer of Binance stated that they will take advantage of this situation to hire top talent that is accessible during this time.

Also read: WeChat’s restrictions on cryptocurrencies and NFTs is bad for users in China in 2022

The Crypto Decline Continues to affect Sports Sponsorships in 2022