HOSKY has the distinction of negative marketing. Instead of a whitepaper, HOSKY has a ‘brownpaper‘ that refers to ‘Doggy Doo Doo’. The ‘brownpaper’ quite amusingly describes HOSKY as follows:

Hosky Token ($HOSKY) was created due to the lack of low-quality s**t coin meme tokens on the Cardano Ecosystem. We saw that such a great need existed and are here to fill that gaping hole as any good boy would. We bring aboslutely nothing other than low-quality memes, no financial value, no promises of mastiff gains, no mind-beagle-ing technology, just doggo memes.

HOSKY claims no technological innovation or grand promises. They exist only for the memes and get brownie points for brutal honesty.  Its also possible that Hosky is well planned scam to trick users into giving  away their ADA.

So What’s the Point?

Memes, that is the point. If you get nothing else out of this brown paw-per please note this: We are not here to make you doggone-rich, our goal is to make #memellionaires.

This is the section where you would normally find marvelous technological promises, only to have them be broken later, diagrams of howl much faster our token is, timelines that will be forever adjusted and doodads to woof ya. Well, we’re a meme coin so we ain’t gonna done did that. Technical is ot us as purebred is to mutt.

To get your paws on HOSKY, you need to follow specific instructions. You can only use a Shell-Era wallet that supports native assets. If you use an exchange, you are warned that you will not get any HOSKY and that your funds may be lost. You are required to send 2 ADA and only 2 ADA to the specified address. In return, you receive 1.5 ADA back and a random number of HOSKY tokens as described by HOSKY. Any amount sent that is above or below the specified 2 ADA will be considered as a ‘doggie treat’.

You can also participate in the HOSKY C(ash grab)NFT … (yes! They call it Cash Grab!)  where you send a specified amount in increments of 6.9 $ADA through a Shell-Era wallet only to receive a number of NFTs described on the site. The NFTs are described as:

Understand that this is not art, they have no utility, they are just PNGS. 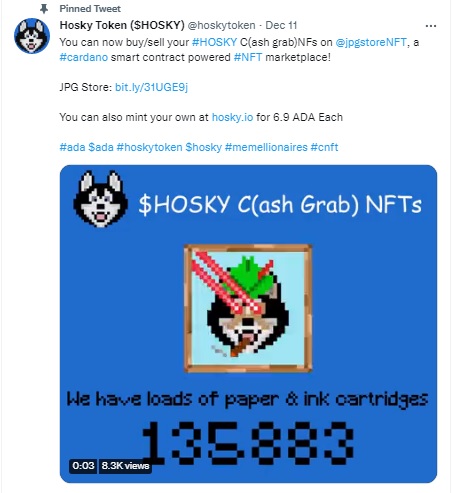 One might think that all this negative marketing would scare investors. But, in a market where most crypto players are posing as the next great thing that is going to the moon, HOSKY is refreshing. It is attracting attention and investors by being fun, humorous and just plain doggy-different! They even make memes that mention rug pulls. HOSKY’s declared goal is Pluto!

By aiming higher than any s**t coin has aimed before, no moon, no mars, we’re going to Pluto! (the ex-planet planet, not the dog). 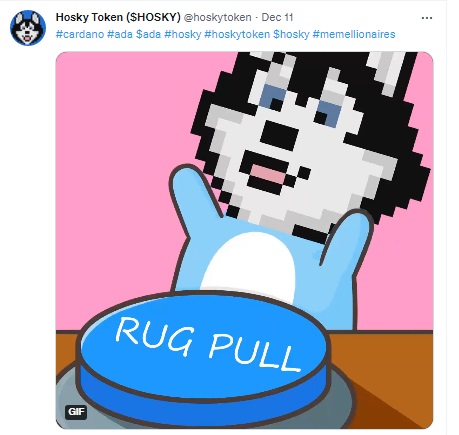 Though HOSKY is self admittedly not aiming for anything more than a stream of memes, it is based on the Cardano network. Cardano is scaleable and has very low transaction fees. If HOSKY reveals or executes bigger plans in future, it has a strong base. Its negative marketing and insistence on selling in small fixed quantity increments make it more desirable. On the other hand, a rugpull could also mean the price going to zero and investors getting scammed bigtime, like the squid game token.

When HOSKY received a request for a bulk purchase, it was publicized on their social media channels, and refused.

HOSKY NFTs are popular despite being marketed as

We will be watching this doggo, at least for the memes.

We request readers to excercise caution in dealing with meme coins.

To Cardano Or Not To Cardano?

We use cookies on our website to give you the most relevant experience by remembering your preferences and repeat visits. By clicking “Accept”, you consent to the use of ALL the cookies.
Do not sell my personal information.
Cookie SettingsAccept
Manage consent

This website uses cookies to improve your experience while you navigate through the website. Out of these, the cookies that are categorized as necessary are stored on your browser as they are essential for the working of basic functionalities of the website. We also use third-party cookies that help us analyze and understand how you use this website. These cookies will be stored in your browser only with your consent. You also have the option to opt-out of these cookies. But opting out of some of these cookies may affect your browsing experience.
Necessary Always Enabled
Necessary cookies are absolutely essential for the website to function properly. These cookies ensure basic functionalities and security features of the website, anonymously.
Functional
Functional cookies help to perform certain functionalities like sharing the content of the website on social media platforms, collect feedbacks, and other third-party features.
Performance
Performance cookies are used to understand and analyze the key performance indexes of the website which helps in delivering a better user experience for the visitors.
Analytics
Analytical cookies are used to understand how visitors interact with the website. These cookies help provide information on metrics the number of visitors, bounce rate, traffic source, etc.
Advertisement
Advertisement cookies are used to provide visitors with relevant ads and marketing campaigns. These cookies track visitors across websites and collect information to provide customized ads.
Others
Other uncategorized cookies are those that are being analyzed and have not been classified into a category as yet.
SAVE & ACCEPT