MINA Snapps Will Be At The Next ZK Hack Event

The goal of the Mina protocol is to allow users to further participate in blockchain technology by removing costly entry barriers. Born in 2017, the protocol is an open-source project that developers can use to build decentralized applications, especially Snapps. Snapps are dApps that use zero knowledge Succinct Non-interactive Arguments of Knowledge – zk-SNARKs.

If Cypherpunks considered privacy as “the power to selectively reveal oneself to the world”, Mina shares privacy concerns and provides users with an innovative solution. Snapps allow users to share to prove a fact by sharing only the minimum amount of information. A real use case that can clarify this point is represented by online loans: by using a Snapp a person can ask for a loan and share only the proof of compliance with requirements, while keeping sensitive data – like credit score – private.

With this solution, the Mina protocol fully complies with the core idea behind cryptos: privacy protection. 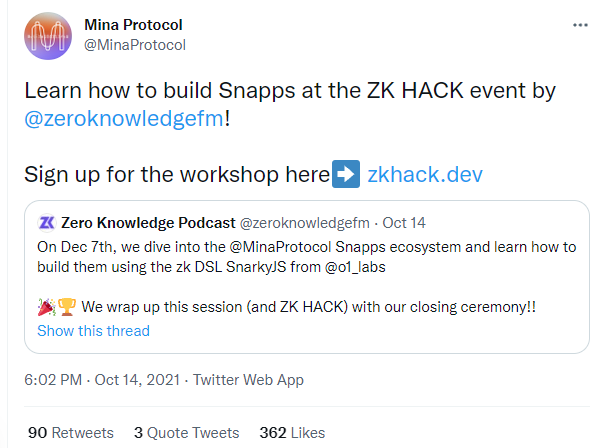 The Zero Knowledge HACK event will allow you to participate in workshops and competitions related to Zero Knowledge tools. The event has a precise schedule that will last 7 weeks. While workshops will serve as an introduction to and explanation of participating projects, puzzles will reward users who can find bugs in the allocated time.

On October 26th users can attend an introductory workshop about ZK Hack and Puzzles.

On November 2nd the platform will reward the winners of the first week’s puzzle and introduce Circom 2.0 – a compiler language. The second competition will take place.

On November 9th users will attend a workshop about StarkNet Smart Contracts and participate in the third Puzzle competition.

On November 16th users will learn about the Anoma Cryptography and compete for the prize of the fourth Puzzle.

On November 23rd the workshop will be about Aztec Connect. As usual, a Puzzle competition will follow.

On November 30th users will learn how to program Zero Knowledge Applications with Leo, and compete for the sixth Puzzle.

Finally, on December 7th – before the last Puzzle competition – users will learn about Mina, with an introduction to SnarkyJS and Snapps.

The Future For Mina

To allow users to build applications reducing computational power Mina uses MINA, a cryptocurrency that exploits Cardano’s consensus mechanism. Even if MINA has no maximum supply, it is currently trading around $4. Possible widespread use of the applications built thanks to Mina Protocol and the PoS mechanism could even increase the value of the project.

To find more information about MINA, you can visit Mina Protocol’s website and its page on CoinMarketCap.