Lower-paid individuals are quitting their jobs because of crypto earnings

Almost two-thirds of those who left their jobs after life-changing crypto profits earned less than $50,000 in total.

The effects of life-changing crypto gains

According to data, some low-wage workers are abandoning their employment after achieving life-changing cryptocurrency gains. Civic Science published survey findings (weighted according to US census data) on Monday, revealing that 4% of 6,741 respondents aged 18 and older had left their employment in the previous year owing to “financial independence” acquired from cryptocurrency investments.

The conclusion of the Survey by Civic

Civics’ conclusions should be taken with a grain of salt since they cross-referenced data from many periods and diverse sample sizes. Additionally, it is unclear what defines “financial independence” in this context since Civic gives no explanation or statistics on the respondents’ cryptocurrency profits.

“This data suggests that although some crypto investors have achieved life-changing amounts of income, the richer owners of crypto utilize it more as a means of asset diversification than a source of income,” Civic Science noted. Financial independence is achieved via cryptocurrency investment. Civic Science

Mark Cuban gives his opinion on the survey.

Mark Cuban, a billionaire investor and proponent of cryptocurrency, tweeted a link to the study, stating that: 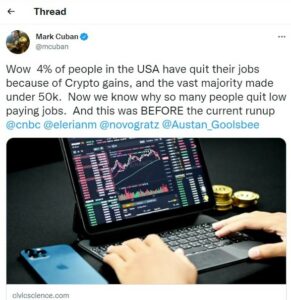 Cuban seemed to be referring to the phenomena known as “The Great Resignation,” which refers to a substantial labour shortage in the United States due to a cultural change. Individuals resigned their jobs in reaction to a worldwide epidemic of low salaries terrible working conditions.

Another survey, conducted between June 17 and October 27, 2021, discovered that the primary reason 28 percent of respondents reinvested in crypto was for long-term gain. Another 23% desired a short-term investment, while just 16% wanted to use crypto as a payment mechanism for “simple, rapid, and secure transactions,” indicating that crypto consumers choose to speculate above transaction usage. “In other words, moreover half of the public (51%) regards cryptocurrency as acting similarly to a conventional stock,” Civic noted. Additionally, the study found that 11% of respondents wanted to hedge against an “adverse economic,” 13% desired “independence from government,” and 11% said “other.”