In what has been described as a massive achievement, Helium announces the addition of Akenza to the Helium Console Integration lineup. This partnership means that Akenza users will now be able to leverage Helium, the world’s most sophisticated and largest contiguous wireless network, to safely and securely send data to Akenza’s IoT platform.

Since Akenza launched in 2017, it has continued to deliver fast, hassle-free, and cost-effective IoT solutions to its teeming community. With Akenza, users can seamlessly build sophisticated IoT products and services. 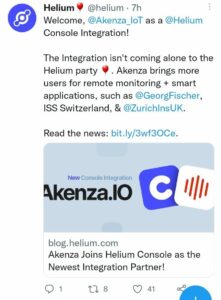 Akenza and Its leading Role in IoT Technologies

Despite winning the 2021 IoT Breakthrough Award, Akenza hasn’t taken its foot off the gas pedal. Its recent addition to the Helium Console Integration lineup is a testament to that effect. Thanks to Akenza, users can seamlessly connect, control and manage all IoT devices, all in one place. Designed for simple and secure smart device management, connectivity, and data control, Akenza’s IoT applications make it possible for the quick introduction of innovative solutions.

Speaking on the latest partnership with Helium, Fabian Gershchwiler, Product Manager, Akenza, had this to say, “With Helium as a new integration partner, we welcome all users of Helium to Akenza, combining the power of The People’s Network and its 260k+ Hotspots around the globe to our IoT platform for unified device management, data streaming, and connectors to advanced enterprise IT cloud systems.”

Akenza and Its growing IoT Solutions

Since Akenza launched in 2017, its services have been trusted by tons of companies around the globe, including big names like George Fischer, a tech firm that specializes in digital retrofitting of existing products to allow remote monitoring capabilities. Also, ISS Switzerland uses Akenza’s platform to sync smart applications for the optimization of the facility management sector. In the same vein, Zurich insurance also deploys Akenza’s IoT solutions for the implementation of several smart building cases.