In response to feedback from the Etherisc community, the DIP token was listed on Bancor Network. Bancor made a co-investment of 200,000 Bancor coins (BNT) and also whitelisted DIP. Liquidity providers can now single-stake up to 10M DIP tokens. There is also the possibility of the integration of Etherisc’s insurance products and risk pools with the Bancor Protocol. 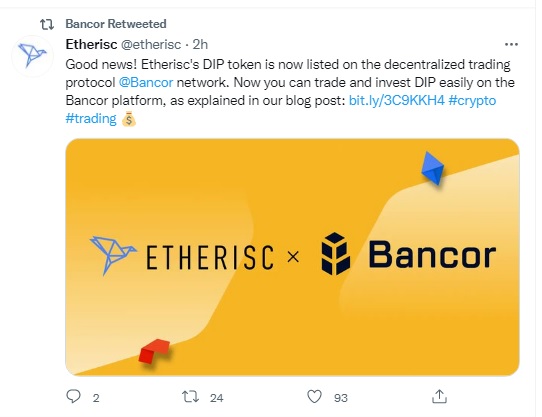 Etherisc is building a platform to use blockchain for decentralized insurance applications with greater transparency, efficiency, and lower costs. It also aims to democratize people’s access to reinsurance investments. The DIP token is the utility token to be used in the Etherisc ecosystem and can be used by holders to monetize their skills. It is also a governance token for the DAOs (decentralized autonomous organizations) that use the Generic Insurance Framework (GIF) applications to obtain risk cover and staking in the risk pools. You can place limit orders on the Bancor Network without paying gas fees which will be borne by the user who actually fulfills the order.

Bancor Network (BNT) is a blockchain protocol built on smart contracts and smart tokens. When a decentralized token does not gain enough attention or traction in the market, it lacks liquidity. Bancor supports this illiquidity. The network creates smart tokens that allow for trading by processing token conversions by holding reserves of other ERC20 tokens within their Smart Contract. The conversion happens between the reserves based on the requests.

Bancor’s protocol uses smart contracts to create Smart Tokens, which serve as an alternative mechanism for trading. A key characteristic of the protocol is that it doesn’t call for an exchange of tokens with a second party, as in the case of cryptocurrency exchanges. Rather, it employs Smart Tokens to convert between different ERC-20 tokens internally. These conversions take place through the blockchain’s protocol and entirely outside of cryptocurrency exchanges. Smart Tokens process token conversions internally by holding reserves of other ERC20 tokens within their Smart Contract. They can then convert back and forth between those reserves as users request it. The network uses a Bancor formula for automated pricing based on built-in automated market makers. It maintains the balance between the smart token’s supply and demand while simultaneously also maintaining the ratio of its value with the connector token balances.

How The Future Looks

The listing of DIP on Bancor Network should attract traders who are attracted to both their principles. Etherisc also states in their announcement that:

We believe that this move will attract new traders aligned with Etherisc’s vision, as well as those eager to get involved in Bancor’s open financial marketplace.

We at Etherisc are thrilled to be associated with one of the biggest players within the blockchain decentralized token space, helping to grow awareness and accessibility to the DIP token.

The Bancor token listing was approved in light of Etherisc’s reputation and success to date, and we’re excited for all that’s ahead!