On October 19th, Benjamin Mincu, CEO of the Elrond Network, announced on Twitter that Woodstock was investing in a project built with Elrond’s technology.

Announced in 2019, Elrond is a young crypto project that went live in 2020. The project describes itself as a solution to the main blockchain-related problems: scalability and efficiency. Elrond is able to allow the execution of smart contracts on its blockchain and around 15,000 transactions per second. All this at a very low cost: $0.001 per transaction.

This level of efficiency is possible thanks to sharding: this technology consists in dividing the blockchain database into small pieces, called “shards”. Each shard is responsible for processing only part of the data stored, and this allows the whole system to be faster and more efficient. At the same time, the computational power needed is significantly reduced – this is the reason why transactional cost is so low on Elrond’s blockchain.

The platform uses a Proof-of-Stake consensus algorithm, and to reward its validators it has its token known as eGold (EGLD).  Elrond’s technology also focuses on interoperability, and its technology got the attention of Woodstock. 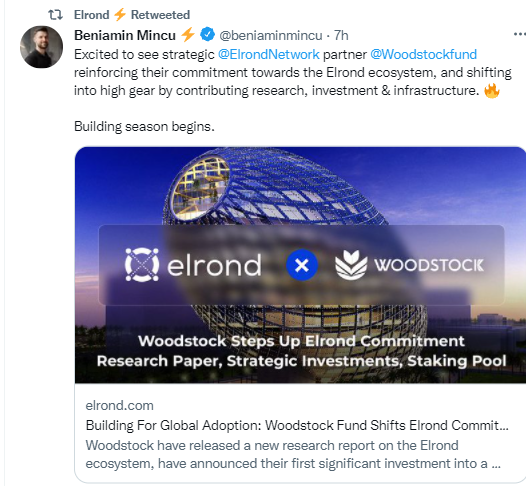 Inspired by the possibilities created by the iconic festival, the Woodstock Fund invests in decentralized finance (DeFi), NFTs, Web 3.0 Protocols and Distributed Ledger Technology (DLT). The Woodstock Fund was also one of the first investors in the Elrond project.

As Benjamin Mincu assesses in an article posted on Elrond’s blog, Woodstock was one of Elrond’s first partners, who helped the project with the launch of its mainnet. On October 19th, the Woodstock Fund published a report, Elrond: Building for the Global Adoption.

At the beginning of this report, the Woodstock Team highlights the importance of user experience to improve the adoption of cryptocurrencies across the world. Despite the achievements of DeFi, the Woodstock Funds reports that UX is not the priority of DeFi platforms, and this can prevent users from adopting digital currencies.

The report then praises the ability of Elrond. Maiar, the DeFi application launched by Elrond in 2021, has already over 500,000 users. The Woodstock Team identifies in UX the reason for the success of Maiar: DeFi transactions are made easier, without renouncing to decentralized finance opportunities.

Mincu’s tweet and Woodstock Fund’s article confirm the partnership between these two DLT-focused actors. As the title of the report states, the Woodstock Fund considers Elrond a fundamental player in the global adoption of cryptocurrencies.

Will this drive the price of eGold up? At the time of writing, the price of EGLD is stable, with a 24 hour decrease of 0.3%, and it is currently traded at over $227.