Cosmos (ATOM) was founded in 2014, when Tendermint, the main contributor to the network, was born. The white paper was released only in 2016, and in 2017 its creators held a token sale to fund the project. The founders are Jae Kwon, Zarko Milosevic and Ethan Buchman.

ATOM – the cryptocurrency of Cosmos – uses a Proof-of-Stake consensus algorithm, and this secures the Mainnet of Cosmos – Cosmos Hub. The hub is powered by Cosmos SDK, a state-of-the-art blockchain used by developers to build projects on top of the Cosmos blockchain.

For this focus on interoperability, Cosmos is defined as “Blockchain 3.0”. The project also focuses on scalability, in order to make transactions easier and faster, solving one of the main problems of those blockchains that use Proof-of-Work as a consensus algorithm.

As we can read on the official website of Cosmos, transactions have a very low cost close to zero – $0.01 – and a high transactional speed – 7 seconds.

These characteristics made Cosmos the second-largest crypto ecosystem after Ethereum: according to Cosmos statistics, the Cosmos Hub is currently supporting over 256 decentralized applications and has over $133 billion worth of digital assets under management.

On October 19th, Cosmos announced on Twitter that they were working on a new project. 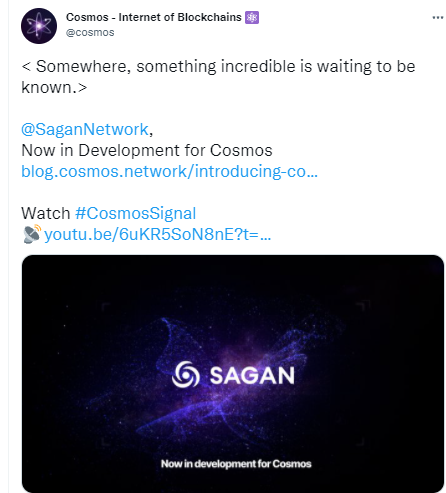 Sagan, named after Carl Sagan, a famous astronomer, will allow users to build and test blockchains based on Cosmos. The project also announced a partnership with Forte, a gaming company that invested in the project.

According to the Cosmos team, this is a big step for decentralized finance and the gaming industry.

There is also another platform under development: Emeris – which should be launched in December – will allow cross-chain farming and staking. So, Cosmos is drawing attention and bullish sentiment.

At the time of writing, Cosmos registers hundreds of tweets per hour, and the price of ATOM has risen by over 6% in the last 24 hours. ATOM is currently trading at over $36.

If you want to know more about Cosmos (ATOM), you can visit its page on CoinMarketCap.